The dawn seeped, thin and gray, through the restless morning fog, lightening the hardly-moving surface of the bay, alerting the birds in the live oaks and pine forests of the hillsides. It caused a rooster to crow and a dog to bark at the rooster. And in the house that backed up on the yard where the dog lived, a man who had slept little because of a colicky baby twisted restlessly and cursed the son-of-a-bitch with quiet competence. At the vast Army training camp a few miles north of Peninsula City, the CQ’s yawned, shrugged into their field jackets, lit cigarettes and clumped through the barracks, picking out the bunks which had the o. d. towels knotted at the foot, waking the KP’s.

Denton Farr’s closed eyes did not respond to the faint lightening of the room, and he was too far away to hear the rooster and the dog and the man who cursed the dog. Denton Farr was asleep in a second-floor apartment above a bar in the heart of the city, six blocks up the hill from the waterfront. He woke to the sound of heavy boots slapping the concrete sidewalk, the sound of motors and tires squealing on the corner, the sound of voices giving crisp orders.

He came awake in the way a cat wakes; the eyes opening and remaining open, the senses of sight and smell and hearing orienting him in that first instant, the trained muscles of his big body controlled, ready. He heard the breathing of the woman whose warm, naked flesh had been fitted against his; he could still feel the pinpoints of heat the firm, erect nipples had left on his back and his nostrils flared at the faintly acrid, musky scent of her. Denton Farr was awake. He was sitting now on the edge of the bed, bare feet on the carpet, watching through the slits of the venetian blinds as his fingers moved toward the night table and the cigarettes.

He watched the doorway of the bank across the street, and the action of the men. There were at least a dozen, and they had come in a fleet of cars. All were in uniform.

Parked immediately in front of the bank door was a sedan marked by military police insignia. On its roof, a red light winked in steady rhythm, painting the slats of the blind, casting barred shadows on Denton Farr’s face. He watched two men climb from the car and approach the bank door.

The one who led the way was a solidly built man. Farr squinted, made out the dull silver leaves of a lieutenant colonel on his shoulders. He wore a gunbelt and a service .45 slapped at his broad rump. The second man was taller, leaner, a captain. He carried a sidearm and held a submachine gun in the crook of his arm. The colonel rapped on the heavy glass door with the tip of his swagger stick.

Farr watched four enlisted men get out of a second MP car, saw them pat the holsters on their hips as they moved up behind the two officers.

To either side, fifty or sixty feet away, other MP’s took up their posts, looking sharply at the few civilians who were in sight. Farr saw a man who had come out of an all-night restaurant walk slowly toward the scene, then turn back after a word from an MP whose finger rested on the trigger guard of his Thompson.

A civilian appeared at the door of the bank and unlocked it from inside. The lieutenant colonel, the captain and the four enlisted men went inside, and a team of two MP’s stepped up to guard either side of the door. At both ends of the street, cars marked with the insignia of the California Highway Patrol moved to block the intersections, their red lights flashing. Gold stars glinted in the early light as the patrolmen, shotguns held easily in their hands, got out and stood beside their cruisers.

A slight movement drew Farr’s attention to the roof of the bank. He saw two more soldiers there. They had a water-cooled machine gun set up on a tripod, a belt of ammo dangling from it. He reached, found the woman’s thigh, squeezed lightly.

There was a change in the way she breathed; it became deeper, more abrupt. Without waking, she groped for his hand, guided it higher.

Farr pulled his hand away and shook her. Bette Vout sighed and awoke, grudgingly. Her eyelids fluttered. She saw him at the edge of the bed, a lean, dark shape. She made a woman sound in her throat and ended with “. . . again, Dent?”

He did not smile or look at her. He leaned over to pull the cord that tilted the slats of the blind open. “The Army’s taking over the bank. Why?”

“What?” Bette rolled up on an elbow, looking. Wheat-blonde hair feathered out from her head and she combed it back with her other hand, yawning, showing good teeth. She was in her late twenties. She had been married once and divorced once and she had come out of the divorce with the bar downstairs. She had a good, long-legged, limber body and a liking for the way a man who knew what he was about could make the body feel. She had liked it so much with Dent Farr that she had sold him a half-interest in the Loving Cup. She had done this because Dent Farr was married to a girl who had a build and a lot of smart, too, and Dent might get so he took her for granted sometime but he’d stick around enough to keep an eye on his investment. She leaned over him, bit his neck with the sharp teeth, ran the tip of her tongue over the taut muscle.

“End of the month. They pay the doggies today.”

“Is that so.” He found a match, got a cigarette going. “I hear they’ve got about twenty-five or thirty thousand GI’s out there. Should be quite a bit of money.”

“I’ve heard it’s up to two million. Depends on how many doggies in the pound, darling.”

“And they get it from that bank?” He puffed on the cigarette.

She laughed, pulled him down on the bed. “You never heard about it?” She leaned across him, mashing her breasts against the corded muscles of his arm as she took the cigarette and puffed on it. “Forget it, darling. You’d make a lousy bank robber. And I happen to know some pro’s have thought about it. Three or four times. It can’t be done.”

Denton Farr let himself relax. Compartments of his mind which hadn’t been called upon to work for over two years were working now. He did some fast mental arithmetic. Of the thirty thousand men at the fort, perhaps one-third would be officers or non-coms who would be paid by check. That would leave twenty thousand, perhaps eighty per cent recruits and twenty per cent cadre who would draw their pay over the table. The average should be at least fifty dollars for each man. It could be closer to seventy-five. Fifty dollars a man would still add up to a nice, round million.

A million dollars would be on its way to the fort built on the rolling hills inland from the sand dunes along the rim of the bay in a few minutes.

It would move with a convoy that was loaded for bear. But it had been sitting across the street in a sleek, glass-and-steel civilian bank all night, maybe longer.

Hell. Denton Farr grinned. Some smart apple was always knocking a bank over.

“They make enough racket,” he grumbled. He lay back on the bed, no longer interested in the men who were carrying canvas sacks from the bank to the sedan with the red light on its roof. He finished the cigarette and listened to the slam of doors and the whine of tires against pavement as the convoy moved off.

Bette was at least partly right. Once the Army took over, nobody was going to get close to that payroll. Not without getting to hold a lily he wouldn’t smell or see.

Dent Farr felt the old excitement again. The last caper was a long time back, and this bank job was ideal because he had never worked a bank over before.

Denton Farr arranged no more than one crime a year. Between projects he worked hard as a businessman, made legitimate money and carefully broke no laws except those dealing with adultery.

He operated under two simple, basic rules: Never do the same thing twice. Never get caught.

Diverting attention from himself came under the heading of “Never get caught.” He had expressed interest in what had happened across the street. Now he had to make Bette Vout forget this.

He put his mouth against the heat of her throat, sensed the acceleration of her heartbeat with the tip of his tongue.

Her hands found him.

He thought about a bunch of doggies cutting up a million bucks.

Excerpted from The Action Man by Jay Flynn, reprinted by Stark House Press along with Terror Tournament. 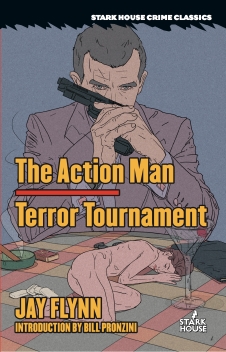 Jay Flynn was born John M. Flynn on March 31, 1928, in Massachusetts. A hard-drinking Boston Irishman, he worked variously as a newspaperman, a bartender, editor, sex novelist, bootlegger, security guard, caretaker and, he claimed, “writer-in-residence” at a Nevada whorehouse. His first published work was his only short story, “The Badger Game,” followed by the novel, The Deadly Boodle, as J. M. Flynn, part of an Ace Double in 1958. In 1975, Flynn went to work for the low-tier publisher, Belmont-Tower, where he lasted two years—fired because of his drinking—then moved to Richmond, Virginia, where he lived for a while on skid row. Eventually relocating to Connecticut, he checked into a V.A. hospital in Branford for a checkup, where he died of cancer at age 57 on February 6, 1986.